CENTRE STAGE COMMUNITY THEATRE TO PRESENT
“THE BEST CHRISTMAS PAGEANT EVER!“
ON “SPARKLE OF CHRISTMAS WEEKEND”

Centre Stage Community Theatre will add to the fun of Sparkle Weekend this year with its production of “The Best Christmas Pageant Ever!” to be presented at First Presbyterian Church (1st and Pine Streets, Corning, NY). Performances are Friday and Saturday night, December 6-7 at 7 pm and Saturday and Sunday (December 7-8) at 2:00 pm.

Barbara Robinson’s “The Best Christmas Pageant Ever” has become a holiday classic since first introduced to television audiences in 1982 featuring Loretta Switt (Mash) as a reluctant mother who takes over the direction of the annual Church Christmas Pageant when the longtime director breaks a leg. The six totally undisciplined Herdman girls, who have never even been in a church let alone a Christmas pageant, nevertheless bully their way into the lead roles. The result is a hilarious, yet profound conversion experience for both the Herdmans and the church community.

“This has always been one of my favorite shows,” says Deacon Ray Defendorf, who is co-directing the play with Centre Stage Community Theatre Board President Kimberly Canale. “Barbara Robinson’s play is a perfect one for the holiday season as it demonstrates the power of the Christmas story to bring about change and understanding. In the play,” Defendorf continued,”the poor and outcast Herdman kids are moved by the story that they are hearing for the first time. Like themselves, Mary and Joseph were poor people not welcomed in Bethlehem. For them, there was no room in the inn. But through the unexpected and unwelcome presence of the Herdmans, the formerly staid and insulated church community grows in its understanding of the true meaning of the Christmas story. As the ‘Avenging Angel’ Gladys Herdman forcefully proclaims – “for unto us – all of us – a Child is born.”

For co-director Kimberly Canale, the participation of a talented cast of nine adults and twenty very active children is a special treat. Kimberly directs Centre Stage Community Theatre’s summer program for young actors. “Many of the middle and elementary school-aged kids who portray the notorious Herdmans and the generally polite and unquestioning Church kids are participating in their first theater production,” she says. “So, staying focused is sometimes an issue. But two months of rehearsals with them has resulted in some very remarkable young actors. It has been a real joy to work with them and I know that our audiences are going to love this show and the delightful kids who perform in it.” 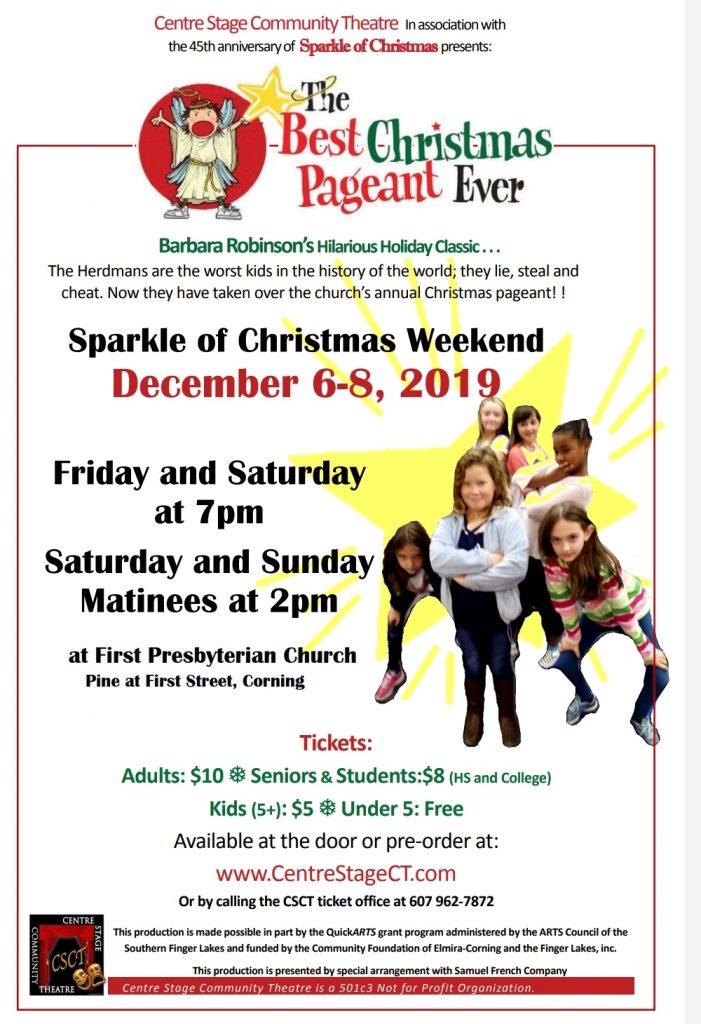 The Cast
In this production of “The Best Christmas Pageant Ever!” Laurie Moyer, a fourth-grade teacher at Corning’s Severn School is cast as Grace Bradley, who reluctantly agrees to direct the Church pageant when its long-time director Mrs. Armstrong (Mary Katherine Tagliamonti) is hospitalized with a broken leg. The role of the church’s pastor Rev, Hopkins is played by First Presbyterian pastor Rev. Jeff Ugoretz who is featured with Adam Youngs (Bob Bradley), and church ladies Kim George (Mrs. McCarthy), Christina Rossetti (Edna Slocum), Katie Puccio-Borkowski (Mrs. Clarke) and Lindsay Crisco (Mrs. Clausing).

In addition to Defendorf and Canale, the Centre Stage Community Theatre production team includes stage manager Dale George, creative director Kaylara Allington. Kate Puccio-Borkowski directs and accompanies the Angel Choir and Mark Sardo created the show program. Parents of the cast members were especially active in encouraging and transporting their children to thrice-weekly practices and in creating and decorating a “Best Christmas Pageant Ever!” float for the Corning Gaffer District’s “Parade of Lights.”

Members of the audience are invited to bring canned food and non-perishable food items which will be donated to the Corning-Painted Post Food Pantry and the Salvation Army. Guests will also be invited to make a monetary gift to benefit these organizations which address hunger within our community.

The local production of “The Best Christmas Pageant Ever!” was funded in part by the QuickARTS grant program administered by The Arts Council of the Southern Finger Lakes and funded by the Community Foundation of Elmira-Corning and the Finger Lakes, Inc.

Tickets priced at $10 (adults), $8 (seniors, high school and college students, and Centre Stage members) and $5 Children (5 – 12) are available online at www.centrestagect.org or at the door.