The Evelyn Peeler Peacock Gallery has been host to a number of member, juried, and solo exhibitions throughout the years. Here’s a snapshot of recent shows and gallery projects: 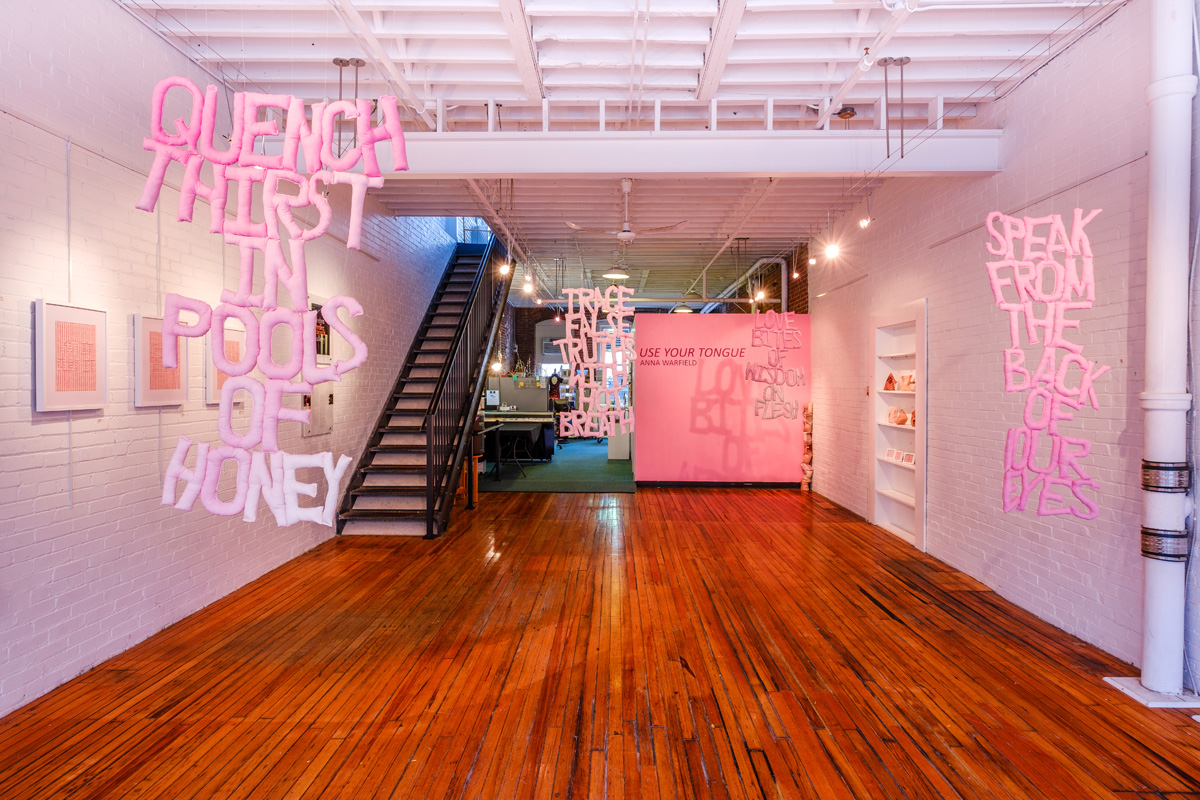 Anna Warfield describes the exhibit saying, “My mostly sculptural, often text-, and always textile-based work is aspirationally frank. The stitched, stuffed didactic poems and commands are confrontational, mesmerizing and frightening, and veer between dead serious and casual. The work addresses complexities in sexuality, female ownership of self, language and voice, with an underlying sexualization of speech. The materials and construction further complicate the picture in not only employing “women’s work” in the service of an unabashedly feminist voice, but also initially reading like comfort objects, squishable and soft, before revealing themselves to be explicit, demanding, or contorted. The fabric’s light colors and soft textures mask the tone of the text, disguising dominance with submission. I deftly catch and hold attention by moving text off the page and into the oversized, dimensional world of my soft sculptures. The work broadcasts its intentions, summarizes memories, and demands conversations with a single other person; it’s intimate, personal, political.”

Featuring the work of eight regional LGBTQ artists, Pride: An Invitational Exhibition was on view starting May 22 through the Corning Pride event on June 15, 2019. The artists were chosen for their artistic excellence and have each written statements to let LGBTQ youth and other marginalized people understand that pride in one’s identity is a path toward a hopeful future. 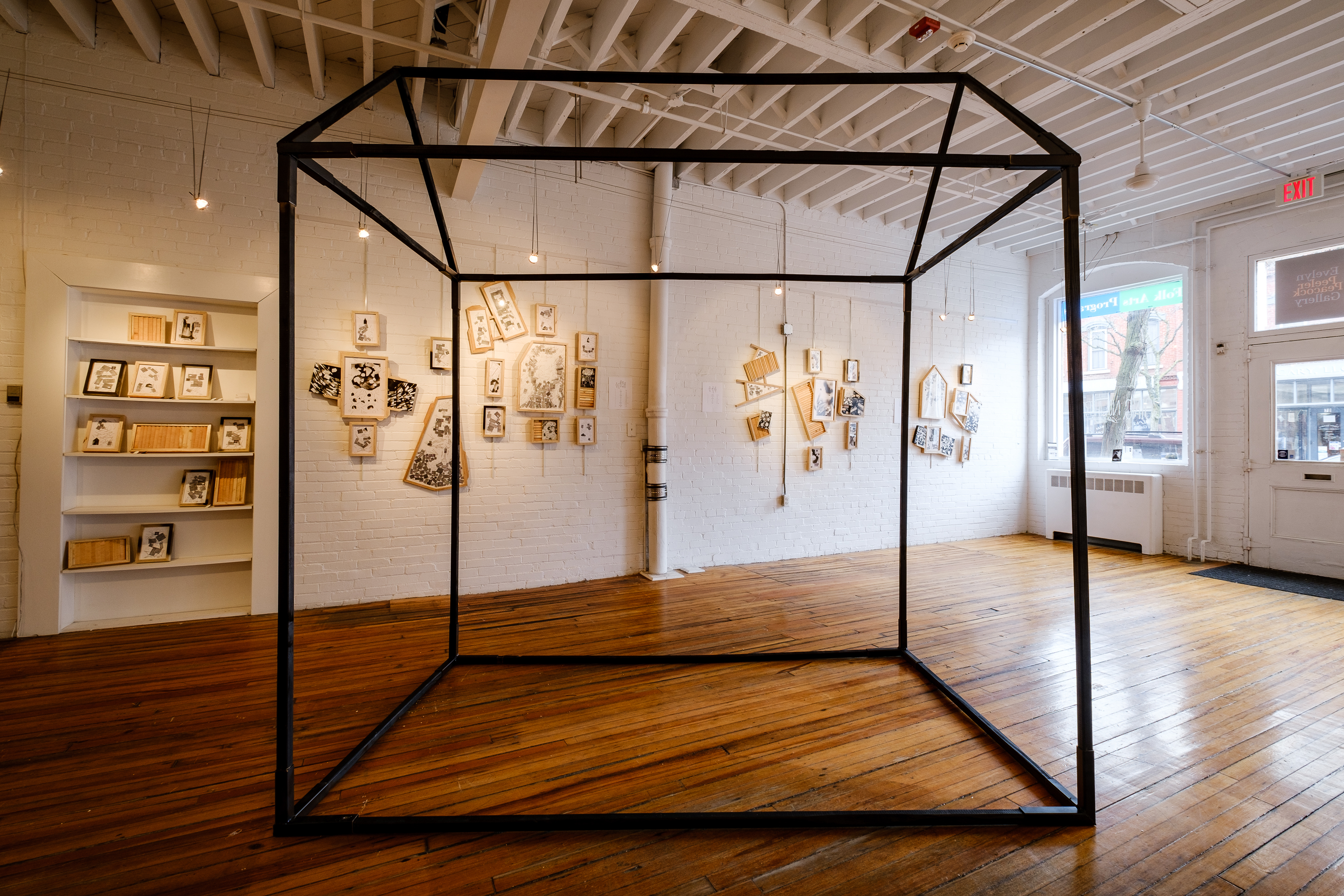 Going Nowhere is a surreal suggestion of place taking inspiration from the small towns and communities in the New York Finger Lakes region. Going Nowhere pairs bold black, ink lines on crisp, hand-made paper with a variety of materials including concrete, recycled wood, and glass. Pieces of buildings come together and burst apart in washing and hazy fields of light. Balanced walls and structures stack dangerously atop one another to form towering shapes bigger than their parts. Going Nowhere asks “why?” It questions the direction one is headed in. It questions the direction that we are all headed in. 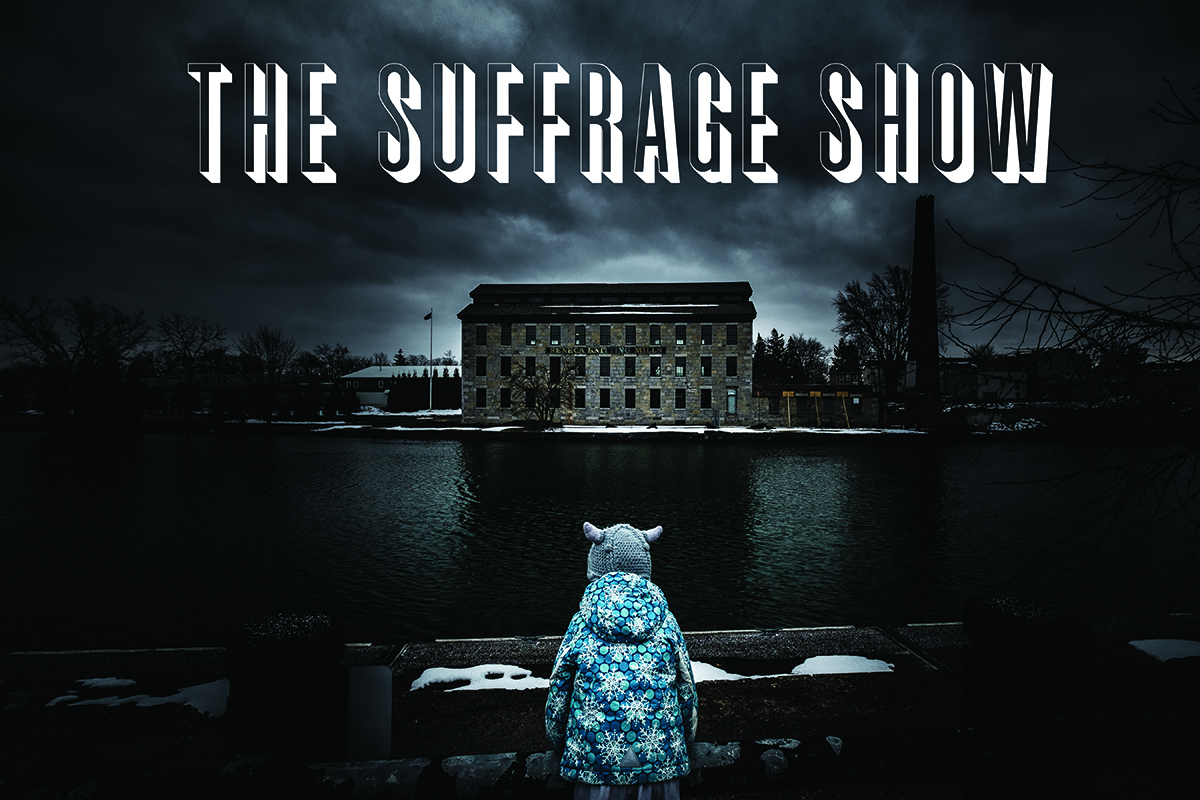 A regional, juried show celebrating New York State Women’s Suffrage Centennial, over two dozen regional artists explore a variety of responses on the notion of Suffrage, the fundamental right to vote in public, political elections. Whether direct commentary on the New York State Centennial or a larger reflection on voting rights issues affecting us today, this show highlights all Suffrage, past and present. 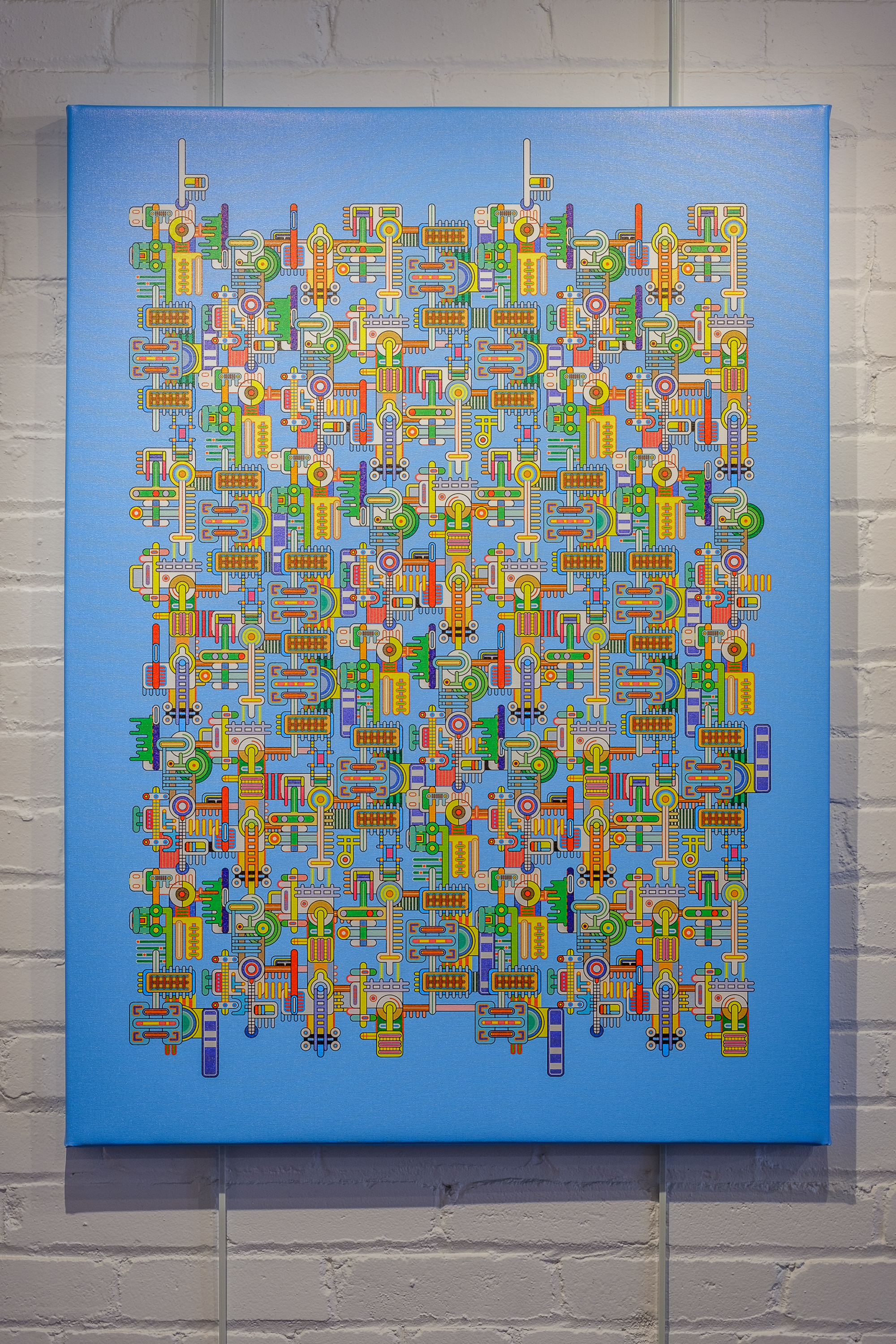 I am obsessed with patterning systems. I care equally for formal arrangements of color and shape as I do for matters of human behavior. In particular, the cyclical pathways of life within a landscape have long captured my attention. As individuals travel, by foot, by car or by bus, they create circuitous loops and almost always return to an origin point. My work is a process of layering these various looping systems of activity onto one another. Each piece starts with a grid-based system formed by a simple mathematical relationship. As layers are added over time, the resulting configurations mutate and expose emergent structures. Variations in texture and detail arise giving a sense of unpredictability to the construction of these pieces. I operate each piece as a game or a simple algorithm. It informs me what to do next as I interact with its many layers. Once the many different layers begin to interconnect over time, the connection points between layers become corrupt or used and mark the end of the piece. Repeat.

We Are Called… to be friend, saint, and good neighbor. Sometimes we feel as though we are not called for greatness, that we are less than capable, less than worthy, and alone in our journey. We Are Called depicts the interpretations of dreams filled with anxiety and striving, a journey from separation and darkness to relation and enlightenment. Primarily working in acrylic and ink, Filomena Jack’s paintings are made up of literal and metaphorical layers. Each new painting in the studio begins by wiping away extraneous paint onto new substrates, allowing these layers of paint, ink, and acrylic skins to collect until she is ready to begin a focused painting using these surprising backgrounds. In this way, she states that “the DNA of every painting lives in every other painting” she creates. 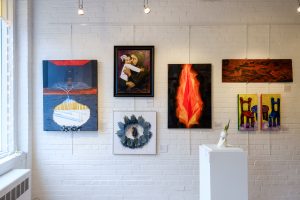 A regional, juried exhibition, this show sought to capture the grace and humanity that sanctuaries highlight, revealing the very best of our communities – the unwillingness to live in fear of the other, the unwillingness to give in to hate-fueled political or ideological bigotry, and the unwillingness to close our doors to those who most need safety and protection. Thirty-five regional artists explored this notion through a variety of responses across a diversity of mediums and techniques including painting, photography, pate de verre, ceramics, fiber art, and more.

Milliken contends that traditional methods of portrait painting often act as a barrier between the painter and her subject. While her work does not ignore tradition, it interrupts traditional methods of portrait painting in order to produce an original image/object. Each portrait involves deconstructing and repurposing the subject’s donated clothing to create the surface their portrait will be painted on. The surface of each portrait is unique, accentuating the subject’s personality rather than the artist’s. Throughout the process of destroying, recycling, and making, Miss Milliken examines how she relates to other people and how her work is influenced by her relationships. In addition, she analyzes the relationship between herself and the subject, incorporates their personality into the materials she uses, and dissects perceptions of herself and others.

A regional, juried exhibition, Cities of Innovation is a  juried member show that highlights the cities, businesses, and individuals that have advanced glassmaking throughout our region. 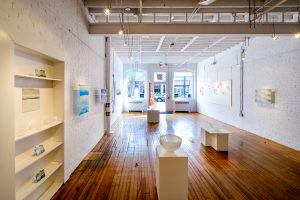 The exhibition’s title, Endless, was inspired by the first lines of Walt Whitman’s poem “Out of the Cradle Endlessly Rocking” and calls to mind the relationship between nature and consciousness. Endless draws attention to experiences of perception and awareness. Subtle color change and frozen movements of glass highlight a phenomenon known as liminatlity, the point of conscious awareness below which something cannot be experienced or felt.

Endless draws reference from water and waves; the ocean is used as a metaphor for our unconscious and conscious mind, implying that what occurs beneath impacts what is seen above. Endless also pulls inspiration from sky and clouds, seeking to capture the intrigue and reflection we feel when gazing at the sky or out at an ever-receding line on the horizon. 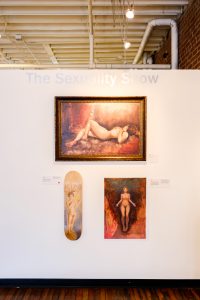 Influenced by Street art, Brad uses strong lines to depict movement and chaos. The paintings in the show are primarily acrylic on canvas or Masonite board. Adding water to the paint, Brad creates transparent layers, letting the acrylic drip through the painting or sometimes wash away entirely. The rapid drying time of acrylic allows him to quickly apply multiple layers, but rather than blending the layers together, he builds them atop one another. Finally, by washing or scratching away a layer, the images becomes less controlled and more organic. This allows him to realize the tension between structure and chaos, calm and instability.

Artists were invited to reflect on the theme and topics on display in the Black Voices of Corning project. Artists considered themes such as the relationships between identity and place, between voices and histories, and between freedom and expression. These themes may be considered broadly and can include issues of race, sexual orientation, class, gender expression, and ethnicity. 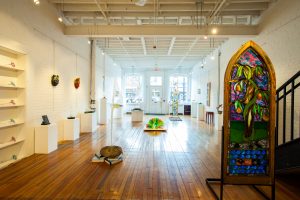 A regional, juried glass art exhibition inspired by the theme of the 2016 Glass Art Society Conference, Creating Context: Glass in a New Light. This exhibition was on display throughout 2016 Glassfest and the 2016 GAS Conference. 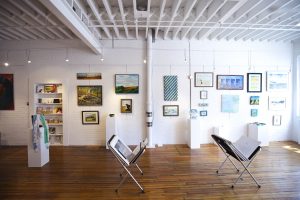 The ARTS Council hosts a number of exhibitions each year featuring the work of our member artists. With no theme or topics, member artists present a variety of medium, themes, and sizes.