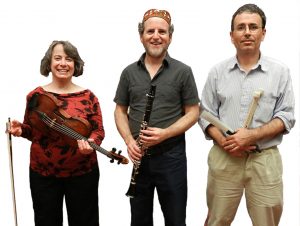 Curator Talk with Dr. Maria Kennedy 8pm
With Music By: 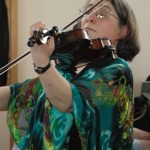 Rima Grunes grew up in Ithaca, where she began studying the violin at the age of three as one of the first Suzuki students of Sanford and Joan Reuning. After a hiatus of 22 years, during which time her violin resided primarily in a closet, she began to play again in the spring of 2004, inspired by the arrival in Ithaca of world renowned klezmer clarinetist Joel Rubin. Rima now specializes in Jewish music, and performs with the Cayuga Klezmer Kapelye and the Klez Project. 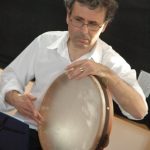 Greg Ezra started drumming as a teenager, and plays in a number of genres: blues, folk-rock, jazz, Middle Eastern, Celtic, Yiddish Swing and (of course) Klezmer. In addition to the Cayuga Klezmer Kapelye, Greg also plays in the Klez Project, Klezmer Kings, the David Graybeard Band (blues, Americana), the Cornell University Middle Eastern Music Ensemble, Taksim, and the Cornell University Klezmer Ensemble. He is never without a copy of “Stick Control”. 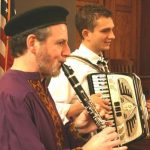 Allen Lutins is a Binghamton area-based multi-instrumentalist/ethnomusicologist, is best known for his work with several Ithaca-based klezmer ensembles. He also performs a variety of other folk/ethnic styles with groups based in New York’s Southern Tier region, including the Celtic/Scandinavian/Americana band Rosetree and the folk rock group Bardo Brothers.