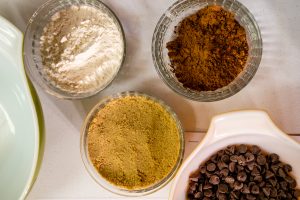 Babka means “little grandmother” in Ukrainian, Russian and Eastern European Yiddish. We also know that babka ws adopted by actual “babas” (grandmothers) in the shtetels of Eastern Europe. Why? Most likely, because a version of babka could be made with leftover challah dough, making babka a delicious yet thrifty indulgence. Challah is egg bread that is braided and served at the Sabbath meal, Friday night. Their babka was quite different from modern day delicacy. Instead of being filled with chocolate or cinnamon, the earliest Jewish babkas were probably filled with nuts such as walnuts or seeds such as poppy.

Once the Jews fled the pogroms of Eastern Europe, Russia and the Ukraine, many settled in New York City, specifically on the Lower East Side. They brought with them pieces of their old life and many of their recipes. The Jews of New York, with new ingredients available, began to embellish traditional dishes, such as bagels and lox. Chocolate Babka was born.