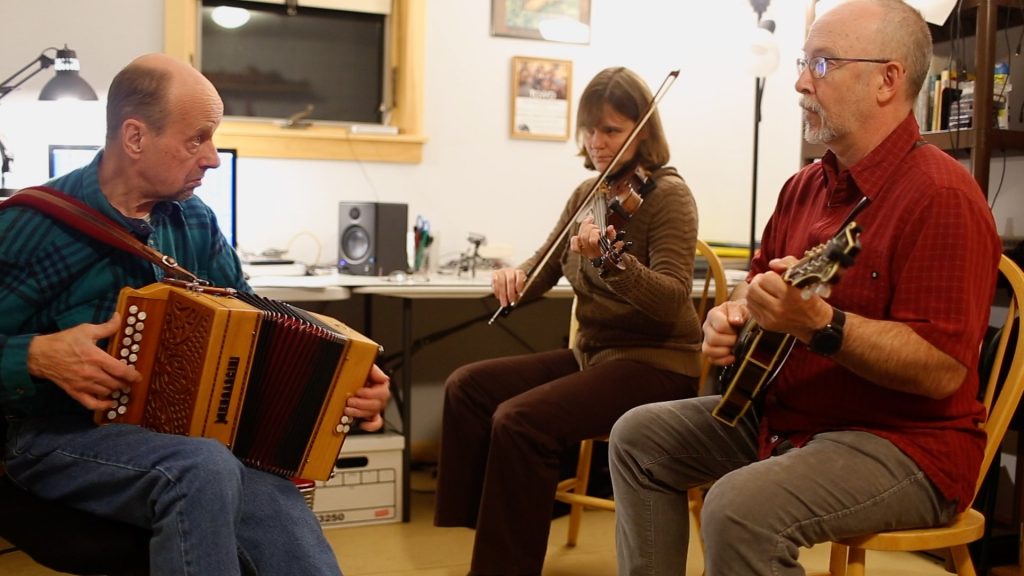 In 2018, Richard Koski received a Folk Arts Apprenticeship grant from the New York State Council on the Arts to teach mandolinist Michael Ludgate and fiddler Katrina Mackey how to play Finnish-American dance tunes. Koski is a master artist and diatonic button accordionist from Trumansburg, NY. Many of these tunes were performed at Finnish social gatherings in the Finger Lakes from the 1910s to the present. Although a Finnish cultural group called the Finger Lakes Finns exists today, there is hardly anyone left who knows the old music. These tunes are some of the approximately 100 Finnish tunes that Richard grew up hearing his father, William Koski play. Around 1970, Richard started actively playing with his dad and learning the tunes. Inspired by their Finnish heritage to learn more about traditional music and dance of Finland, Katrina and Michael formed the band Metku. As part of the apprenticeship, they transcribed all the tunes Richard taught them, creating a written record for future generations.

Enjoy some of the tunes below, recorded in Richard’s home in Trumansburg, NY in December 2018.

“Kallen Valssi” (Carl’s Waltz). When Richard asked his dad the name of the tune, he said he didn’t know its name,  but he used to hear his uncle Jake in West Danby, New York play it. For years, Richard referred to this tune alternately as “Jake’s Waltz” and “West Danby Waltz.” He eventually heard it on an old 78 rpm record listed as “Kallen Valssi”, which is how he refers to it today.

“Laurin Sottiisi” (“Lauri’s Schottiche”) is performed in the key of D. It’s another one of the tunes Richard learned from his dad, who didn’t know the names of most of the tunes that he played. Richard later found it on an old Finnish American 78 rpm record as “Laurin Sottiisi.” On another recording it was listed as “Jukkan Sottiisi.” Richard says, “Sometimes what we think of as Finnish folk tunes, especially the schottisches it seems, are found in other Nordic countries under Swedish or Norwegian names.”

Richard named this tune, “Sisu Polka,” which refers to the Finnish concept describing the strength of character one acquires through great struggle. When Finns began arriving in Spencer, Van Etten, Newfield and Trumansburg areas in 1910, they bought farms that had been neglected or abandoned in part due to the rugged nature of land. They learned to work the land and built cooperative agricultural businesses to support one another. The notion of sisu feels appropriate for both the Finns that settled here, and for the way the musical tradition continues today. “I’ve never heard anybody else play this tune — not on old Finnish records or anywhere,” says Richard about it. “I don’t know where Dad got it, but it sure sounds Finnish, and the only music he ever played was the old Finnish music that his parents’ generation brought over from Finland.”