Saturday will feature Old Time performers in a variety of styles, with workshops and an Old Time Jam tent. Bring your instrument and join the Old Time music, or bring a lawn chair to listen! 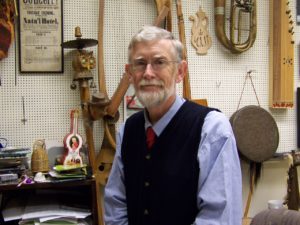 Jim teaches music history, world music and folklore, and directs the Geneseo String Band in the Music Department at the State University at Geneseo.  He plays several traditional instruments, including fiddle, button accordion and concertina, calls square dances and frequently lectures and presents papers on many musical subjects.  Jim has collected tunes and stories from several old time musicians and callers, written articles and presented at folk arts and museum venues.  He has performed regularly at the Farmer’s Museum in Cooperstown and the Genesee Country Museum in Mumford, New York, where he specializes in 19th century popular and folk music traditions.The Geneseo String Band, made up of SUNY Geneseo students, alumni and local residents, has been in existence since 1976 and has played concerts, receptions and dances in a wide variety of venues. The band was organized as an ensemble within the music department to perform a variety of old-time American popular and folk music especially that characteristic of central and western New York and in the Irish-American community. 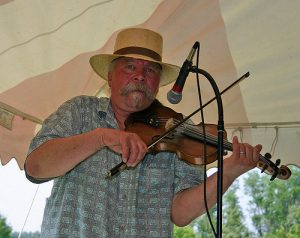 One of western New York’s best known fiddlers for over 30 years, Phil Banaszak is a former New York State Fiddling Champion and, in 2005, was inducted into the North American Fiddlers Hall of Fame. He is a faculty member of Community Music School in Buffalo, where he teaches fiddle, violin and mandolin. Phil has the lowest-pitched singing voice ever, and a world-class mustache to boot. The City Fiddle is composed of Gretchen Banaszak (fiddle, viola) and Chris Panfil (fiddle, mandolin, banjo, harmonica, guitar). Phil also plays with the Canal Street String Band, alongside Dave Ruch and Jim Whitford. 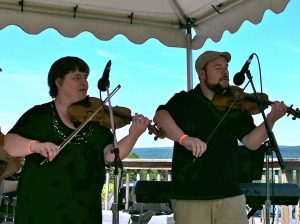 Jackie Hobbs and the Clemens Tradition

Jackie Hobbs was born into the fiddling tradition of the Tug Hill region of upstate New York. Her grandmother, Alice Clemens—three times New York State Lady’s Fiddling Champion—gave Hobbs a fiddle when she was five. Throughout her childhood, Hobbs traveled with her grandmother to fiddle events across the Northeast and eastern Canada. Hobbs plays several styles of fiddle music, but her main influence has always been her grandmother, who mixed New England and Canadian styles. Jackie is a music teacher at Sandy Creek Central School. She performs for concerts, festivals, and smaller gatherings as well. She also is known for giving fiddle workshops which feature tunes that were written by old Central and Northern New York fiddlers that are no longer played, with Dave Ruch from Buffalo. She often appears with her group Clemens Tradition which is made up of herself, two of her aunts, and a family friend. 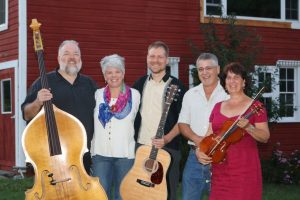 Uncle Joe and the Rosebud Ramblers

Traditional Tunes from the Backbone Ridge

Uncle Joe and the Rosebud Ramblers offers a mix of lively up tempo New England fiddle tunes, energetic old time tunes from before the Civil War and family oriented traditional folk songs that have stood the test of time. It’s a common sight to see a spontaneous square dance or elegant waltz break out among the toe tapping audience during a performance. Joe’s wonderful renditions of traditional folk songs are enhanced by Cap’s wild guitar playing and singing. Robin holds down the groove and keeps ’em honest with Alice a genius on the spoons. Renee’s thirst for finding new tunes for the fiddle guarantees the listener and dancer a new treats at every show. 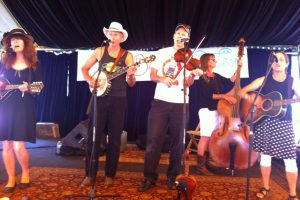 UpSouth is an old time string band that plays music from the southern Appalachian Mountains that became popular in this country from the mid-1920s through to the Great Depression. The band members bring their respective experience in Old Time and Country music to play the fiddle tunes and songs “you’ve all been callin’ for”, with Mac Benford on banjo, Marie Burns on mandolin, John Hoffmann on fiddle, Randi Beckmann on guitar and Sally Freund on bass. UpSouth delivers fast and furious fiddle tunes for your dancing pleasure, as well as soulful and sappy ballads that caress the spirit and bring a tear to the eye.

Mac Benford, an icon of the old time revival movement, has remained a leading figure in the preserving and playing of Appalachian string band music. Marie Burns is a singer, songwriter, mandolin player, and long time member of the prominent American folk group, The Burns Sisters. John Hoffmann is the fiddler for UpSouth as well as for the band Long John & the Tights. John played banjo for The Tompkins County Horseflies in the early 1980’s before he segued to fiddling. Randi Beckmann is the guitar player for UpSouth as well as the band Long John & the Tights. Randi began her musical career playing classical flute and attended music school at Ithaca College. Sally Freund is the bass player for UpSouth, Long John & the Tights as well as an award winning clogger. 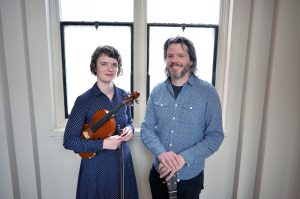 Oona Grady and Drank the Gold

From Upstate New York, Oona Grady (fiddle, viola) and James Gascoyne (guitar, vocals) play and sing North Atlantic dance tunes and folk songs. Steeped in Irish music for as far back as she can remember, Oona spent many years living in Cork, Ireland, where she honed her skills as a fiddle player and Irish music specialist. Upon moving back to her home town of Ithaca, New York, she immersed herself in the local traditional music scene and incorporated old time and Cajun tunes into her repertoire. Not steeped in Irish music, or any traditional music (as far as he can tell), James draws on his eclectic musical background in experimental music, rock, and jazz to create a fresh and exciting approach to dance tune accompaniment. For his vocal repertoire, he chooses folk songs that express universal and intangible feelings of love and longing. Now based in Saratoga Springs, New York, Oona and James collaborate as Drank The Gold, bringing new perspectives and innovative arrangements to the music that they love. Craic agus ceol (good times and music)! http://drankthegold.weebly.com/

Sunday will feature music and traditions from communities and people of Nordic heritage in our region. Participate in workshops on Nordic music and art forms, join a Scandinavian/Nordic Jam tent, or come to enjoy the music of the North on the cusp of midsummer! 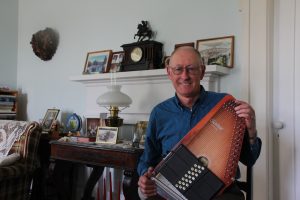 “The Danish wouldn’t buy a new suit for a wedding or a funeral, but for the Danish dance, they would buy a suit!” recalls Ron Christenssen, with an amused smile. The Danish dance was indeed a big affair in Yates County, New York, during the 20th century, between Christmas and New Year’s Eve. Today, Ron carries on the Danish folk tradition, while incorporating Country and Western tunes. He plays the guitar, and enjoys playing the harmonica and the autoharp together. In his rich repertoire, Ron builds a bridge between tradition and innovation. The autoharp (displayed on the photograph), for instance, is an instrument that originally did not exist in Danish folk music. 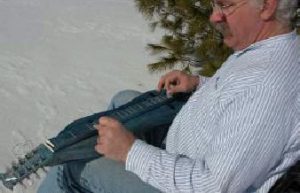 The drone of the wind in winter pines, the waves on an ocean shore, a crackling fire, a baby’s coo, a dragonfly buzzing. Nils Caspersson loves the fretted dulcimer, and have been making and playing his own instruments since college in the 70s. Now a retired teacher, Nils have had a lifelong interest in folk music and woodworking. Being Swedish American (his father was from Falun, Dalama, in central Sweden) has inspired him to find the links of distinctive design and musical qualities of the fretted dulcimer and its Swedish folk music ancestors, the hummel, psalmodikon and moraharpa. Nils performs on an original enhanced dulcimer he calls a “spelmåner.” In Swedish, a dulcimer used for traditional music and the spelmåner is perfect for Swedish tunes. 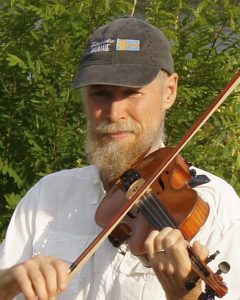 Stefhan Ohlström is a Rikspelman (Fiddler of the Realm), a winner of the prestigious silver medal in Swedish traditional fiddling in 1983. Stefhan has roots in Uppland & Västmanland. He performed with Ceylon Wallin and other great musicians of the folk revival. He continues to teach & play for dancing in both Sweden and the USA, where he makes his home in Ithaca, New York. Stefhan has recorded three CDs of Scandinavian music with Laurie Hart, and two more CDs are in the works to complete the Scandinavian Fiddle Tradition series.http://lauriehartfiddle.com/ 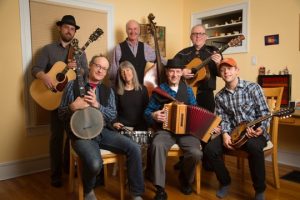 TOiVO is a dance band from Trumansburg, New York, playing the traditional music of the Finnish community of the south-central Finger Lakes region. Much of this music was learned from Richard Koski and his father, who both played for Finnish dances in the area from Spencer to Trumansburg. Besides the Finnish polkas, waltzes, and schottisches, the band also plays music from Cajun country and the Tex-Mex borderlands. Added to the mix are tangos, fox trots, classic country tunes, and plenty of TOiVO originals. TOiVO plays at local restaurants, bars, wineries, dances, and festivals, and has been the featured dance band at national Finn Fests in Hancock, Michigan and Buffalo, New York. The band consists of Richard Koski on button accordion, Jason Koski on mandolin, Jim Reidy on guitar, Stefan Senders on banjo, Harley Campbell on upright bass, Annie Campbell on snare drum, and Paul Martin on guitar. TOiVO (pronounced toy-vo) is the Finnish word for ‘hope’. It is also a very common male Finnish first name. There are ‘Toivo & Eino (pronounced ay-no)’ jokes about Finns, just like there are ‘Pat & Mike’ jokes about the Irish. The band is very happy that Rich didn’t choose to call it ‘Eino.’ Contact Richard at rkoski@zoom-dsl.com or go to their website: http://toivo.honkingduck.com/ 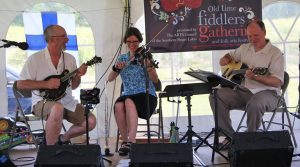 Michael Ludgate (mandolin, banjo, kantele) and Katrina Mackey (fiddle, flute) have both been inspired by their Finnish ancestral heritage to learn more about traditional music and dance of Finland. The result is the band Metku. Katrina and Mike play as a duo but often are fortunate to have the super talented Philip Robinson (guitar) join for a trio. In addition to the traditional Finnish repertoire, we play traditional music for contra dances, square dances, private parties and weddings.